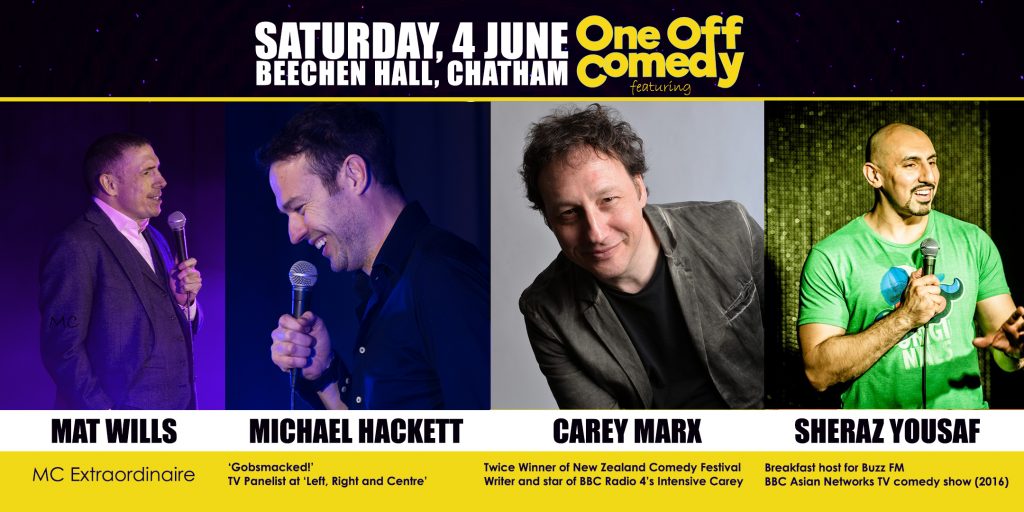 Get ready for a hilarious fun night, Chatham!

On our mission to bring world-class comedy to audiences everywhere, we’ll be performing at Beechen Hall a one-off you can’t miss out on!

writer and star of BBC Radio 4’s Intensive Carey and twice winner of Best International Show at the New Zealand Comedy Festival. Currently performing his new show, Carey Carey Quite Contrary, at the Edinburgh Festival. His previous twelve solo shows have been described as, ‘Quite brutal, in a darkly comic Quentin Tarantino kind of way’ (Chortle), ‘Comedy of the most cerebral variety’ (Herald), ‘Essential Viewing’ (Fest), ‘Supremely-crafted comedy’ (List), ‘Awkward misﬁt Marx has a genius for the unexpected and hilarious left turns’ (Guardian), ‘Such a devilish grin, that you can only admire him for being such a magnificent bastard’ (The Scotsman).

In 2012, Carey had a heart attack and wrote a highly acclaimed show, Intensive Carey, about his battle back to health. He quickly became Britain’s top heart attack comedian (apart from in Scotland where there are bound to be loads).