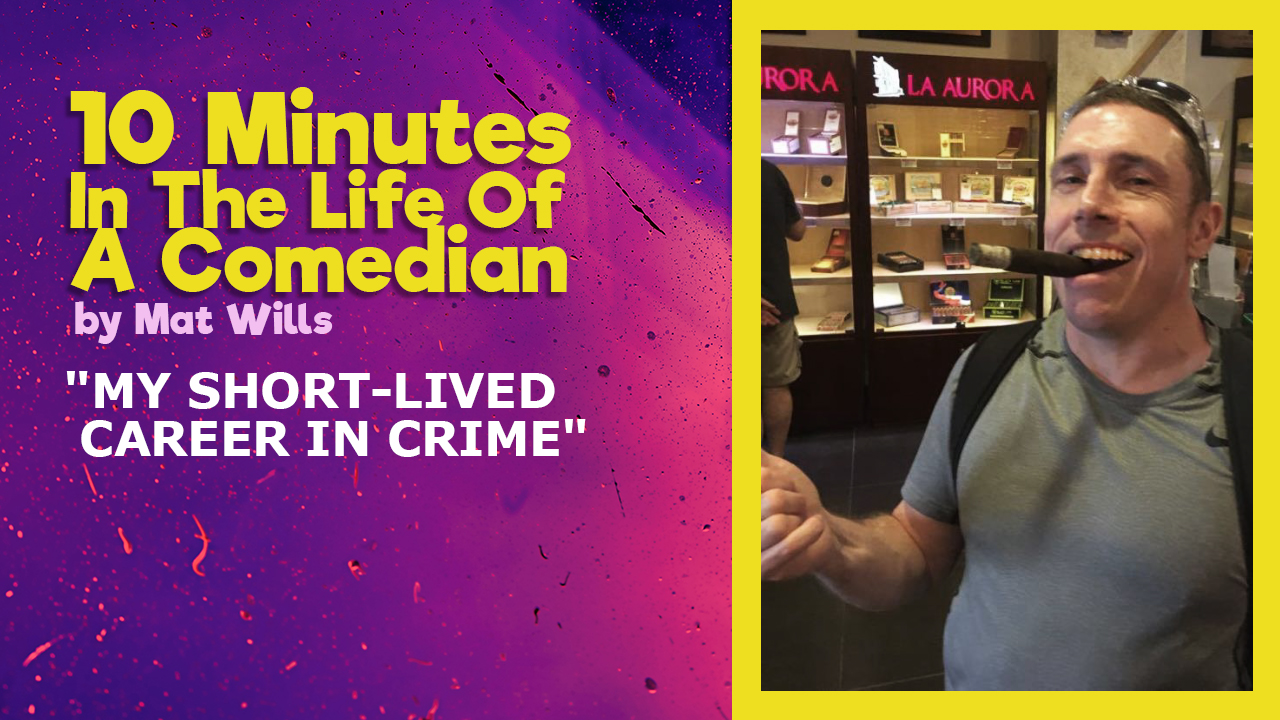 I’m in! Yes! I’ll reposition the items I knocked over and no one will know I’ve been here. Breaking into the house was exhilarating. Don’t get angry, it was my best mate’s house and I didn’t steal anything. We were there for cartoons and sandwiches.

We decided to bunk off from school. What were we learning anyway? Some nonsense about triangles that I’ve never used to this day? It’s one of the shapes I’ve never had much use for, unless playing trivial pursuit or eating cheap cheese.

Life skills would have been a better lesson. Being an adult man surrounded by friends and loved ones who are going through the menopause, and understanding how tough it is, would have come in useful, but no, the three-side shape was the preferred subject matter.

The owner of the house was called ‘Mum’ by my pal. I don’t believe that was her real name. She didn’t really like me and only tolerated my existence, probably because I was always in trouble with her son. I don’t want to sound childish… but he started it.

His dad was the opposite and showed me love, compassion as well as encouraged me to pursue a career in ‘being funny’. I should have listened to him rather than break into his house to eat toasted baked-bean sandwiches.

My first breaking and entering ‘job’ was at my own home, conveniently located on the street I lived on. I was 6 years old when given my first key of the door. Historically, it was when you turned 18, but I couldn’t be standing around waiting for my independence for another 12 years, I wasn’t a country in the Commonwealth, I had things to do, dammit.

The punishment for a lost door key was two weeks pocket money withheld, plus I had to stand outside until dad got home. No mobile phones back then, so the wait could be anything between 30 minutes to several hours.

Of course, a few weeks after being given my independence, I lost the key.

I could and would not miss my cartoons. That day I learnt the meaning of the phrase “Necessity is the mother of invention”.

It was a standard two-storey house. I’m sure it had more tales to tell but who would listen.

My dad had left the top front bedroom window opened a smidge. That was my entry point. Sure, it was perilous, but I was six and had no comprehension of that.

I’d like to say Danger was my middle name but it was -and still is- David.

I started the climb, then slipped and fell from 5 foot up, which is not high unless you are only 2.5 foot tall. That scared me a bit, so I mopped about for a bit and revaluated the situation.

I believe that this is where my problem solving skills started to develop. I‘d have a career in IT later in life that relied on these and it was all thanks to Tom & Jerry cartoons.

How to get in? Then I spied what had always been there. It was as if I seeing it for the first time. The chute! It was an old house and this was where coal was delivered to, back in the day, and it led into our cellar.

I was tiny compared to everyone I knew, I still am.

Could I fit down that tunnel? I lifted the lid and jumped back.

Cobwebs. Millions of them. Spiders, why did it have to be spiders? It looked dark, very dark. I’d have to go through an arachnid city by the looks of it. How bad did I want to watch cartoons?

Into the belly of the beast I went.

I shimmied down the filthy slope. I moved slowly along, bumping into things, bruising ankles. I was petrified.

My only experience of the cellar was putting 10 pence into the electric meter.

I made it to the bottom. “Hold your nerve and walk, Matty”.

Yes, I made it to the cellar stairs! I climbed them very slowly and then pushed open the door to bright light. I was inside and home.

Back outside, I went to cover my tracks and make it look like I hadn’t broken in.

So back to my mate’s house…

No coal chute this time and the years had added an extra foot to my height, so I scaled the front of his house and luckily didn’t fall. Neighbourhood watch hadn’t been invented yet so that was handy.

I went up like Spiderman and through the window. I replaced the items on the dresser and ran down the stairs to let my mate in. We hung out, ate baked-bean sandwiches, and then sneaked out.

They had been burgled, she proclaimed. Fingerprints were taken. I was a criminal.

Damm. If my dabs were ever taken and matched to this caper I’d go down for sure.

‘Mum’ [not her real name] had a mother’s intuition that I was somehow involved, but she never said anything.

My friend and I are still close. We reminisce a lot about what idiots we were and still are. I don’t believe he’s ever fessed up to this.

My prints are probably still on a police database, a fact that haunts me to this day and the only reason why I’ve kept out of trouble for so long.