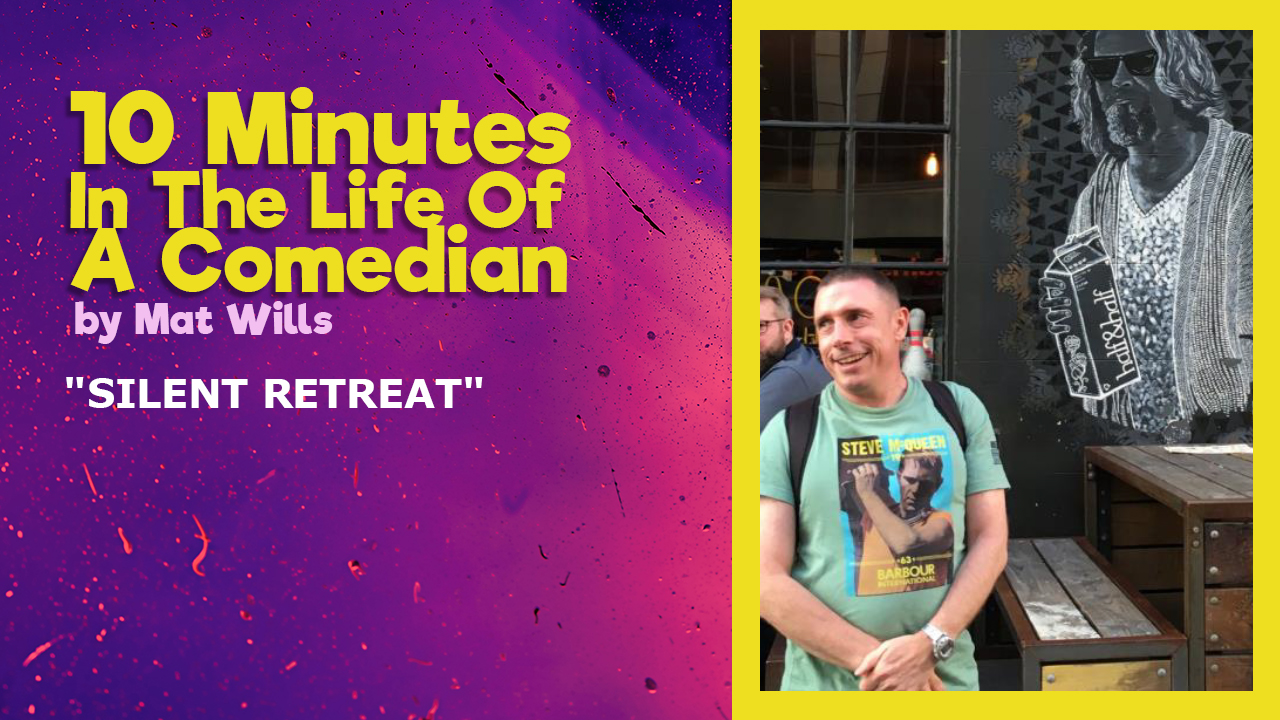 The person I was in November 2017 was a weird little man because he enrolled future me on a waiting list for a silent retreat. I’ll answer a few basic questions you may have;

What’s a silent retreat then?

For a number of days you stop speaking and instead try to meditate. This apparently takes you a step closer towards becoming a more enlightened human being.

Someone I admired, who was cool and relaxed, mentioned that they’d done it.

Isn’t that stupid and doesn’t it mean you have no original thought or ideas?

I was 68th on the waiting list. I assumed there would be no way I’d be going and, at the time, April 2018 seemed a long way off.  Then, on a Wednesday, I found out I’d become number one. This was a new feeling as I’d never been number one before. All those teachers who said I’d amount to nothing… Pah! Go me! Number one was off to become more enlightened.

I found out later that the men’s waiting list was always high initially but then reduced rapidly as the commitment became real. Men!

This experience couldn’t go wrong. No arguments. No animosity to others…

I was such an idiot to have believed all of these things.

Upon arrival, I shut my mouth, as I’m a stickler for the rules. A silent retreat means keeping your gob shut. Right?

I was interviewed and asked to surrender all my technology, but I didn’t need to as I’d left my phone in the car. It was then explained to me, with a slight degree of menace, that I still had to hand it over so as to avoid the temptation. They’d also take my car keys thank you very much.  Wow, they’d heard about my weak will.

I then sat in the kitchen. All the other guests were talking and this began to wind me up. Wasn’t this a silent retreat? As if reading my mind, an authoritative person arrived and explained that the quietness would start from 7pm. We were to follow the ‘noble silence’ and then go and meditate with a monk. Cool, I’d always liked monks. I kind of grew up with a monk, his name was Tripitaka and he was helping this chap named Monkey. Some of you may recall the same experience.

The rules were fairly simple:

No communication with another human being, including no note passing.

Wash up your own plate and cup.

And, similar to the Gremlins, no food after midnight.

I went to the meditation room and met the monk. It was then I caught on that it was a Buddhist retreat. I just thought we all shut up and meditated, maybe read a few books and looked at trees, nature and stuff, then attained a step towards enlightenment. I didn’t appreciate the Buddhist angle and thought to myself I really must read more of what I sign up to.

So we prepared to meditate.

Myself, 49 other people, the monk and his two pupils who were dressed in white. They looked cool. Tripitaka cool.

The main monk announced that we would all chant together.

“I’m Buddhist till I die… then again when I’m reincarnated.” Catchy.

I wanted to ask about the ‘noble silence’ being interrupted but obviously couldn’t, so I just chanted, badly, the same as everyone else. I did wonder at this point if I was being indoctrinated into a cult as I’m not Buddhist, but again, I couldn’t tell anyone, so I vowed to keep my vow of ‘noble silence’ and just follow the rules.

After 10 minutes of chanting, we meditated for about an hour. It was lovely. In the past to attain this feeling I’d need some form of fat, long, herb-laced hand rolled cigarette.

Who knew that sitting in a room counting my breath was an easier way to relax and didn’t make me want to eat chocolate and watch terrible TV.

After meditation and listening to the monk tell a few tales, we retired for the evening.

I was sleeping in a dorm room with 25 other blokes, which was fine, as we didn’t have to speak to one another. When the lights went out all I wanted to say was “Night John Boy” but I’m a rule follower. Regrettably, now finally everybody else is.

On Saturday you were woken at 5:30am to begin meditating from 6am.

I was already an experienced meditator, as I’d used the Headspace meditation app on my phone for a few months, and I’d been known to sit in calmness for 20 minutes a day. I find it helps my confused brain. Meditating for over an hour though was harder. Firstly, holding the position of sitting cross-legged and straight-backed became very painful after a period of time. Pain makes me angry. Anger leads to hate… hate leads to suffering etc, etc.

The main monk had a microphone so the room could hear the wisdom he’d occasionally speak and, of course, his chanting. The mic was an over the head one, similar to the one comedian Michael McIntyre uses, and the whole listening to the monk experience reminded me of an open mic comedy night. When Mr Monk spoke, there was silence for ages but then he’d get one huge laugh from a very silly comment, which broke the tension and normally involved how much the other monks would wind him up. We learnt how he overcame this and, believe me, I was learning a lot. Monks had anger issues to overcome, too. Tripitaka hid it well.

I’ve had 30-years experience of London Underground and, with it, an in-built ability to ignore other people. Some of my fellow mediators clearly hadn’t and it was starting to show.

A woman tried to speak to me on the way to breakfast. I didn’t want to get in trouble so I blanked her, didn’t she know the rules?

At breakfast they ran out of bread. Some people had two slices; some exceeded their limit and had three or four. On seeing this one chap wanted to go full Chuck Norris but realised there was nothing he could do. There would be no toast for him that day.

My first proof of karma was being put on toilet-cleaning duty.

In the past, I’ve lived with my share of lovely idiots and when we’ve divided the housekeeping jobs this had never been one of mine. I don’t know how I dodged this bullet but now it was payback. I had to clean the kitchen toilet.

Turned out this was the best job, as that toilet was never used. I’d had it done in ten minutes and was free to do………… what?

What exactly was I free to do?

Have a bloody big think about what had I gained from never doing toilet-cleaning duty with my various flat mates and partners?

After about 15 hours silence, with no eye contact, I realised it was exactly the same environment post an argument with your other half, but the difference was there was no accompanying stress of knowing I was in the wrong. All the food was carbs. This made me very sleepy.  After lunch, and during the meditation, I fell asleep, rolled forward and knocked into another person. Three of us toppled over in a domino effect. No need to apologise for this act. I liked this ‘noble silence’ stuff.

Without voice, it seemed to remove people’s ego. You can’t dislike humans as much as you once did when you don’t have to hear their nonsense, but anger will always find a way. There were a couple passing notes to each other. This wound me up but I couldn’t have a go at them. Damn you ‘noble silence’!

They were also flirting with one another through the messages. You could tell how they smiled and giggled slightly. What were they saying? How on Earth can I find enlightenment if I’m curious about these idiots?

The man from the flirty couple then got his partner to do their washing up. Could no one follow the rules?!!?

The woman next to me during meditation was communicating through looks to her friend and it would appear she was very angry about the meditations. Why was she there? Why was this bothering me?

Some people didn’t do the meditation they just slept, why were they there?

I really was starting to get wound up by some of these people. It started to feel that enlightenment was moving in one direction and I was moving in another.

In the kitchen whiteboard someone wrote “Thanks for the food, it was lovely”.

I wanted to write: “Anyone know the football scores?” but, just like my John Boy comment, it remained in my head. Now was not the time to be the class clown.

All this silence meant I was becoming lost in my own thoughts, which is a safe space, as I’d never find my way out of another person’s thoughts.

Saturday rolled into Sunday and I must admit to a calmness coming over me. The note-passing guy did the washing up this time and that helped quell some of the fires within.

I also spent two hours walking back and forth between two trees in a walking meditation. This sounds awful but it really was a lovely calming exercise.

The last few hours were tough as West Ham had an afternoon kick off and it was on TV. When it was over, my first words were along the lines of “Forgive unkindness, contemplate knowledge” – Unfortunate acronym.

We could speak and then people didn’t shut up. The floodgates were open.

The guy who looked like he was super cool turned out to have a terrible voice. Suddenly I detested them all. I wanted out.

I ended up giving someone a lift and they enquired as to my thoughts and feelings about the argument that erupted the night before. I’d missed an argument? That was unlike me.

Apparently one of the people who stayed in bed and slept all day got a bit of a slap for snoring by the calm guy with the terrible voice. Everything is just like football.

I really did learn a lot about myself. Mainly that other people wind me up and that to find peace I probably need to be on my own, but with a TV and Sky sports.

After speaking to others, I found that I’d had a much easier time than most. Some struggled mentally being isolated with themselves. It would seem that the years I’ve spent on my own mind being disconnected from the world works really well in ‘noble silence’.

I’m still not a Buddhist, although for while I tried to convince my few friends to give it a go, so maybe I did get sucked into a bit of a cult-like mentality.

The whole weekend was free as it was run on donations by previous attendees. Rats, I was now a previous attendee. I guess there really is no such thing as two free lunches and two toastless breakfasts.

Next time I’m going to have an argument with my better half and unplug my broadband router. That’ll save the drive.