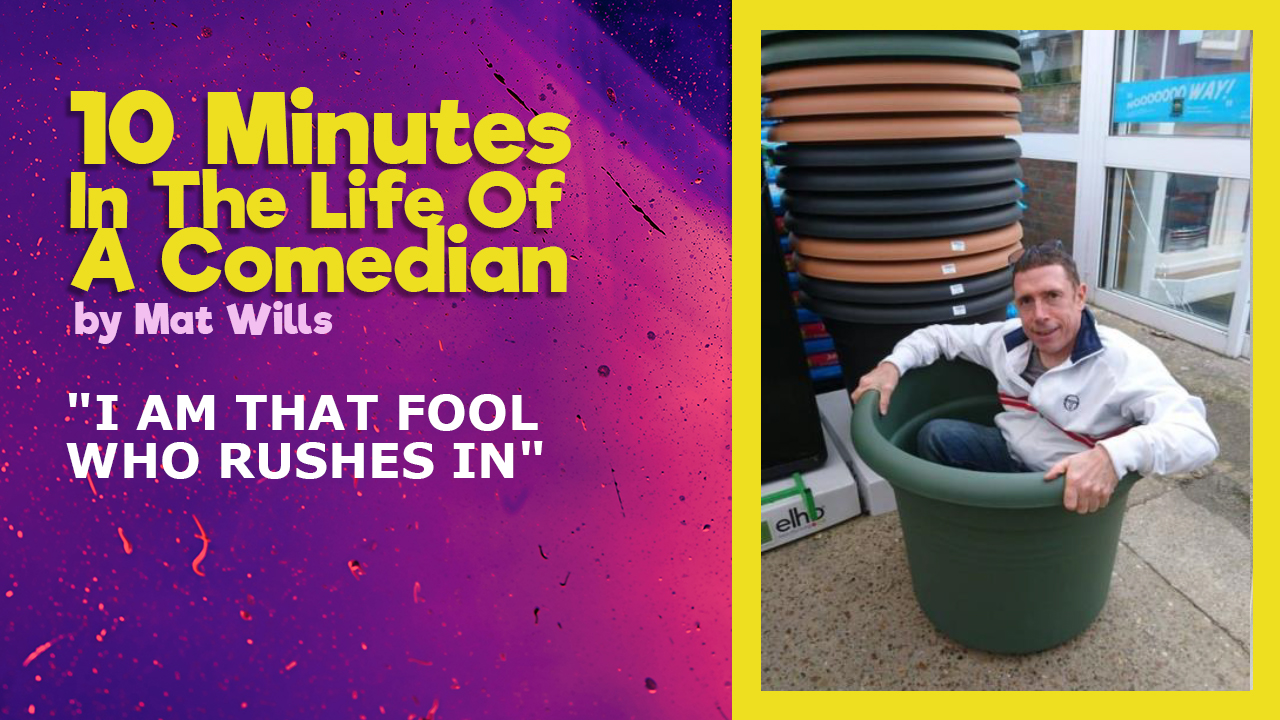 ACT YOUR AGE NOT YOUR SHOE SIZE – PRINCE

I believe it was Rik from the Young Ones who once said “Fools rush in where angels fear to tread”. Well, he was right. I’ve since been told that this phrase is an idiom and that I am THAT fool who rushes in.

All I generally require is the spark of an idea and I’m up for it. In fact, much to the annoyance of people close to me, I need almost no information when I make a decision.

Yesterday this fool once again rushed in with consequences involving trees, wees and performing comedy.

I normally go running in my local park but yesterday my knees were hurting. Or, as my old nan would say, they had been giving me ‘Jip’. I never knew what ‘Jip’ was, but, from memory, a lot of her body parts gave her ‘Jip’. Regrettably I am now well acquainted with ‘Jip’ in all its forms, as it is currently affecting all items north of my big toenail and even that isn’t in great shape.

It was a glorious day and, whilst I was in the park, it reminded me of where I grew up. That was a different childhood park and it had crazy dangerous hills that I used to cycle down; one of them was called Dead Man’s Drop and one day I thought it was a good idea to ride down it. Whilst I made the perilous descent, my bike hit something and stopped. I, on the other hand, didn’t and I flew magnificently through the air like Superman until my old friend gravity played its part and my body hit the ground. Was this ‘Jip’? No. Phew. I thought I was lucky not to be really hurt. That is until my bike came crashing down on me moments later. Oh… that was ‘Jip’.

After a reminiscing wander through my new park, I thought it would be a great idea to relive part of my youth. So I climbed a tree. As previously stated, as soon as the idea popped into my head the decision was made. By the time I thought if this was a good idea or not I was already up the tree.

How do you get down from a tree?
Getting up seemed simple but getting down not so much.

One of my earliest memories of my mum was when she looked up after my cries for help while I was stuck in a tree in our garden. She said that if I got up there I could get down. Three hours I was up that tree and eventually I got down when I needed a wee. I thought the wee factor would not have been required, as I’d cried so much. I was five years old.

Damn! Why did I just think of that? It made me need a wee.

Back to the tree dilemma: How was I going to get down from it? It’s not like an ex-girlfriend would pop up and push me.

A man in an electric wheel chair stopped by. I shouted to him that I was stuck but he laughed and then drove off shaking his head. “Oi!” I cried out, “I used to be disabled, we’re meant to help one another!”

About ten minutes later, the ‘what ifs’ started to pop into my head.

“What if I had to phone the fire brigade?”,
“What if I’m the idiot on the front page of the local newspaper [again] shamed for wasting public resources?”,
“What if a cat was not rescued because they were helping me?” – Is my life worth more than a cat’s? Who makes that decision?

I was beginning to think I may have overestimated my remaining sixteen summers and that I should have done more with them. For example, I’d never been to Japan or slept in a tent. Is this what a wasted life looks like? Dying in a tree? Oh, Swampy, you made it all look so romantic.

Moments that seemed like hours passed and a mum with two children walked by. I called out in desperation. “Please help, I’ve got myself stuck up this tree.” She just laughed. She was mean. What is it with people? This was no laughing matter. She then repeated the words I heard from my own mum “If you got up you can get down.”

Then a couple joined her and they asked what was going on. I’m not sure what she said but they laughed and within a few more minutes there were about 12 people looking up all laughing.

I had an audience and they were laughing at me. You know what this means.

“Good afternoon everyone, I’m Mat Wills and welcome to the park. I seem to be stuck in this tree.” The crowd laughed hard. Wow, this was a gig!

In Comedy, if you have a really great gig it’s known as ‘Taking The Roof Off’. I looked up but there was no roof, which could only mean I was on the verge of having my best gig ever. Watch Out McIntyre.

Someone then shouted out that I was barking mad. The crowd laughed again. I shouted back that I told a guy in a wheelchair and that he must had gone to get help. They laughed again. That wasn’t even funny and they cackled. This was audience interaction at its finest.

I explained about having left my mobile in the car and the laughing continued. I think I heard the word ‘idiot’ more than once. By this stage, who cared? It was great and my woes had left me.

I told a few more gags but by this point they were beginning to lose interest and I realised it was too much of a good thing and I’d have to exit stage left.

Necessity is the mother of invention so I decided I would have to climb down.

I gradually eased my way down and made it to the much lower branch and hung off. I then stupidly looked below me. This was a mistake. OK, I’ll climb back up and have a rethink. No I won’t, as my puny little hands wouldn’t let me and I had begun to lose my grip. I fell. The crowd gasped. Thud, tuck and a roll, I then stood up and gave a theatrical ‘TaaDaaaa”.

The mean mum asked if I was OK. Of course I wasn’t OK but people were laughing again. I know that laughter is what I want but preferably not like this, as it would be much more fulfilling if it had been through some clever word play I’d created and not because I had become some kind of modern day Frank Spencer.

Although, deep down, the smiles I’d created were a great comfort. The park people were a good crowd, too. Tough, but appreciative.

I’m no longer up a tree but, truth be told, my knees are now really experiencing some ‘Jip’.