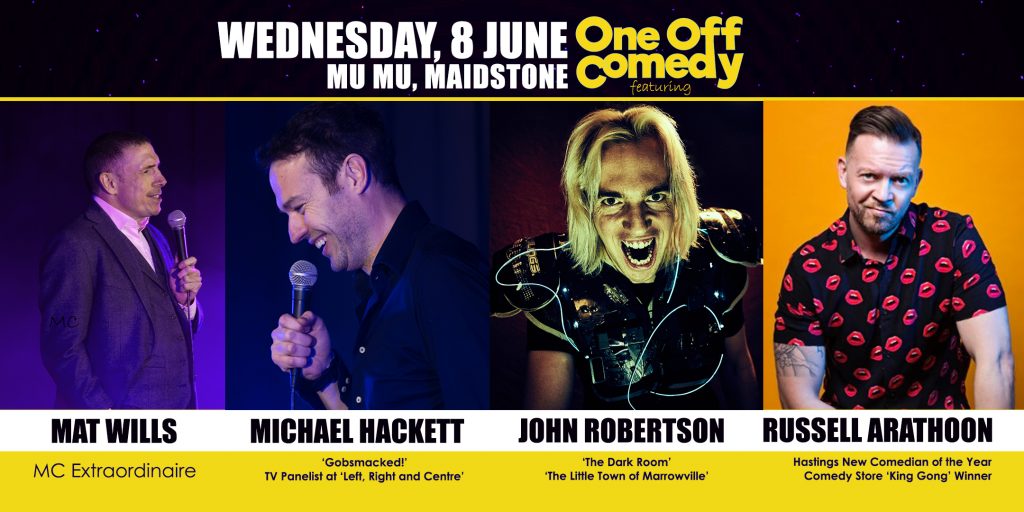 Get ready for another hilarious fun night, Maidstone!

Back by popular demand, we’ll be performing at the fabulous MU MU another one-off you can’t miss out on! New sets, new faces and all the usual cheekiness! 😀

Add the amazing cocktails and other tasty beverages by MU MU and really, there’s only one question left… Who will you treat this time? <3

Remember every show has sold out in advance so get your tickets early to not miss out!

the creator of The Dark Room, the world’s only live-action videogame comedy (“Say goodbye to this morning’s work plans”- Eurogamer. After becoming a hit on YouTube he turned the game into a live comedy show at the Edinburgh Fringe 2012, returning every year since then as a cult classic.

It has led to collaborations with BBC, Comic Relief, FremantleMedia, Hat Trick Productions and PIAS. Of his stand-up The Scotsman says it is “A manic and quick-witted revelation and The Guardian confirms it with “Not to be missed”.

an energetic & fast-paced stand up comedian from the Manchester who “Instantly connects with his audience” (says CHORTLE and his audiences). With naughty one-liners & lots of inappropriate humour, you’ll thoroughly enjoy our favourite Comedy Store ‘King Gong’ Winner, Hastings New Comedian of The Year and Leicester Square’s New Comedian of the Year finalist.

A Manchester born comedian who performs stand-up around the UK, Europe and Australasia. He’s a regular at the Edinburgh Fringe, hosted Oktoberfest to 2,500 people and released a bestseller book ‘Gobsmacked!’. Previous to this he trained as a dentist, quit French clown school and joined the circus. After a trapeze accident broke his left testicle, however, he finally picked up the mic.

A short man with many tall tales. An engaging compere, he puts audiences at ease with his deft crowd and cheeky East End vibe. Notts Comedy Review thinks he’s got “Impressive quick thinking” – they haven’t even seen anything yet 😉