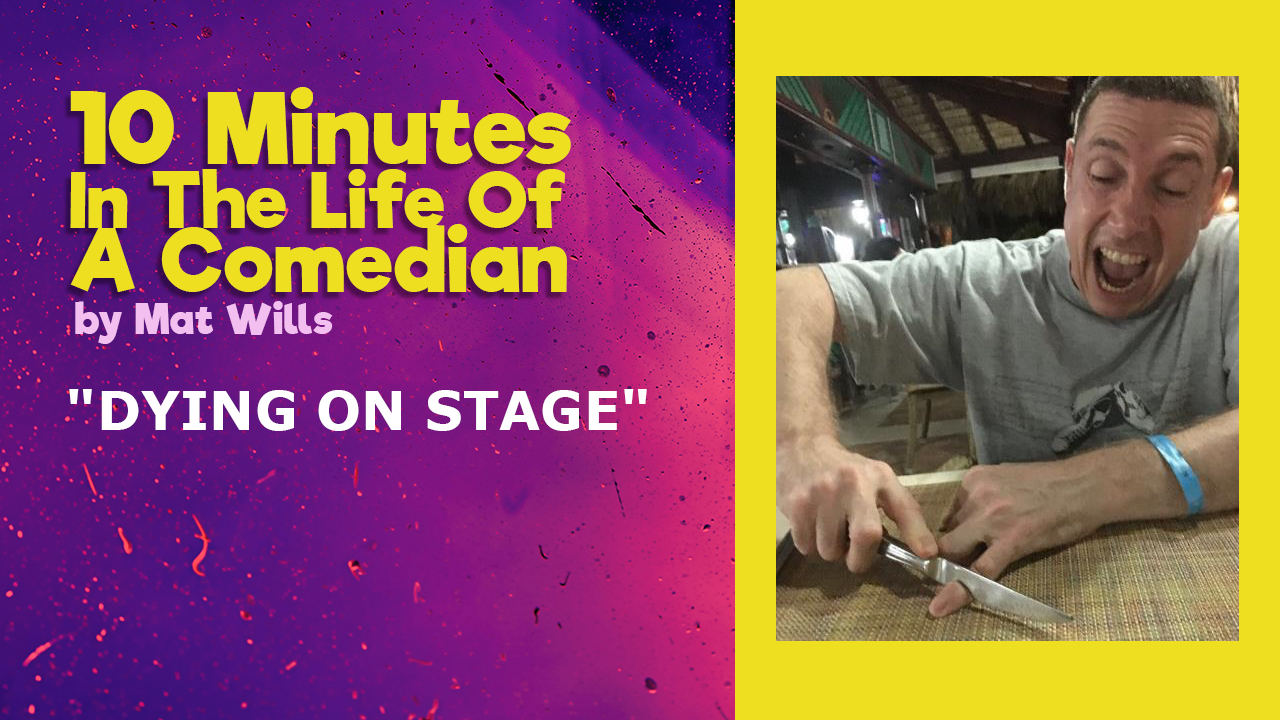 When a stand-up has a terrible gig, it is known as ‘Dying’ but when they have a really good gig it is called ‘Killing’. Either way it results in death and anecdotally I’ve heard that Killing produces a greater feeling than Dying.

I’ve snuffed it on stage several times but the one that gives me a reoccurring nightmare and wakes up my Mrs with me screaming out in my sleep was from the night I died in Burton upon Trent.

The story is this….

I had offered to drive a car full of professional comedians to a comedy night in exchange for 10 minutes on stage.

In my experience the comedians’ car share is a master class in comedy as I normally learn more from the car journey than I do from being on stage. These people, on that journey, were incredibly funny and to be honest I was feeling out of my depth and intimidated by the talent around me. Imposter syndrome kicked in. “Why had I agreed to do this?” I convinced myself I wasn’t ready but I knew I had worked on my routine and it was funny. I rehearsed it in front of several drunk people in a pub in Folkestone and they cracked up so I convinced myself I would be fine.

The audience in Burton had paid about £10 each and there were over a hundred of them. The MC warmed them up and the first act went on. He was excellent and my confidence started leaving me quicker than my cash at a petrol station.

Then it was my turn.

What struck me was that I was performing at a professional gig after only 3 months of trying. It takes some people years yet I was there. I’d nailed it! My name was announced; I walked onto the stage and got a laugh. Hurrah. Within seconds of my opening monologue I tripped over a line. I looked at the audience and knew they had gone and I still I had 9 minutes and 40 seconds remaining. I clearly hadn’t nailed it. I’d just smashed my thumb with the world’s biggest hammer in front of a lot of people.

I ploughed on to a quiet room and the only thing breaking the silence were the pins dropping from the sky. I’d died before, quite a lot in fact, but this felt different so, after 7 minutes, I decided to say thank you and I walked off. The audience had suffered enough and the pity looks had been replaced by looks of contempt and pure anger. Not only that but observing 100 people glancing at their watches in unison, while attempting to make them laugh, hurts the soul.

Collectively they had wasted 11 hours watching me. That’s more than a day’s work, or two depending who you’re working with. The MC wasn’t prepared for the early exit however and he jumped up onto the stage simultaneously losing his footing and planting his face at my feet. A gasp went up… which actually broke the deafening silence.

The MC was now rolling around on the stage in pain as he’d really hurt his knee. I collected myself as I was unsure of the correct etiquette. Should I stay and help him or should I run away?

I went to help him up but like a true professional he sprang to his feet, said something funny and the crowd chuckled. He continued to warm them up for a few minutes, reminded them how to laugh again, and brought on another act who was fantastic and removed any thoughts I’d had that maybe the audience were terrible and I wasn’t.

Later I asked the MC what I had done wrong, I’m sure he wanted to say all of it, but he was very kind and he explained that my setup was too long before the punch line. He then laughed and told me not to worry about it – all the time rubbing his knee.

The headline comedian, who I really admired, went on and killed. He was funny and even in my pain he had me laughing.

The four of us then spent the next 5 hours in a car driving back home. My failure was not discussed although I wanted to ask for more advice, but I was too embarrassed.

The next day I emailed the promoter to apologise. He was also kind and told me that everyone goes through this and that he would still book me. Secretly I knew this was only because I had a car and was willing to drive other people about for stage time and not because I was funny.

My mate Sparky once had a cab driver who had only been driving for a week. When he was asked how it was going he said “steering very easy, braking very hard”. I envy that cabbie as I’m not finding any of what I do easy.

That Burton upon Trent gig haunts me to this day but I do laugh about it now and find it cathartic talking about it. The thing is, I know that there will be more terrible gigs in mine and my audience’s future.

Although it’s too late for me and the lovely people in Burton.

More of Mat Wills on the internet: