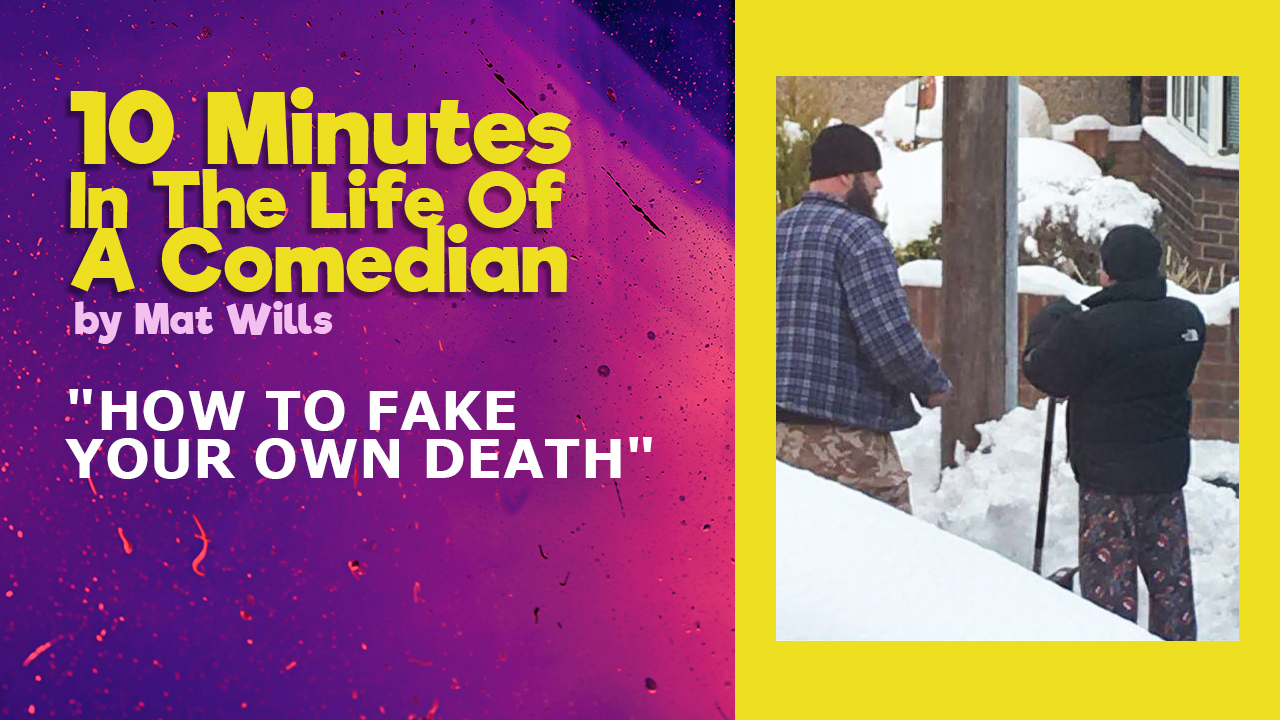 When I was 13 years old I had library fines that amounted to about 90p. Way back then that was a lot of money and if I gave you some further context to show you how much a packet of cigarettes would have set you back in 1984 it would have been £1.10.

Because I owed the library money, and because I couldn’t live with the guilt, I decided to fake my own death.

Now, this may seem a bit dramatic, and a lot of work, but I had the time. I didn’t have money, however, as I was already trying to find another 30 pence to buy some cigarettes. Also, I’d committed a crime before so it was a road well travelled and the ‘crime’ I had committed was to create my own stash of one-pound coins by gluing five pence pieces together, spraying them gold, and then using them at the school disco to buy sweets.

In essence, I was showing potential as a villain. Or as the hard necked gangsters would say, I had ‘form’.

The obvious thing to ask at this point is why I didn’t just pay my library fines with one of my stash of fake pound coins? It’s a good question but I was sure the astute people in the library would notice as the lighting there was much better than it was at the school disco. I’d heard the saying that if you died your debts died with you. So with this in mind I was done and my plan to fake my own death started to take shape.

These days you can create a new identity on your phone but in the early 80’s the Internet wasn’t even a glint in its creator’s eye and home printing was a very long way off.  That meant that creating a new identity was not an easy undertaking and I knew that it would take guile and perseverance, so I managed to get a copy of my birth certificate and then gained access to a photocopy machine.

Photocopiers, like the Internet, were not that accessible in the 80’s, and, ironically, the one I used on this occasion was at the library. I made one copy of my original birth certificate and then somehow managed to fade out my name.

It was at this point that my new alter ego was born. Jason Lambert. I cannot recall the decision around “Jason” but the surname “Lambert” was in honour of the greatest Frenchman that has ever lived. I’m talking about Christopher Lambert or “The Highlander” as he is more commonly known.

Next I went to the library, not to use their copier, but to return the books with the fines on them. Acting was my number one subject at school and I was using the full range of my craft. I explained to the librarian that my best friend Mat Wills had tragically died and in doing so I started to cry a little. “He was such a great guy. Did you know him?” I was grief stricken for poor dead me and I remember telling the librarian what an amazing human being Mat Wills was and how he would be missed. He was so funny.

“Did you see him in the school play he directed and co-wrote which won the award for best show?” It was truly inspiring. By the end of my tall tale you would have thought Mat Wills was a humanitarian version of Eric Morecambe.

I may have overdone it but I was 3 feet and 8 inches and little people didn’t lie, that was just how it was in the 80’s. Children, especially short ones could be trusted.

“There were fines on the book you say?” I explained I was just a poor schoolboy and asked if I should send in his mum after the funeral? No? OK then well thanks for letting him off, he really would have appreciated it.

The librarian accepted my story and I walked away from the counter feeling quite cocky. Mat Wills was dead. Jason Lambert was just about to be born.

A week later I returned to the library, ensuring that there was a different librarian at the desk and I registered as Jason Lambert. Job Done. I had a new identity and I’d avoided paying the fine. I thought I was so clever.

The funny thing is the Jason Lambert ID was never used again as it was a one hit crime. That is until now. I’m thinking about resurrecting Jason as I’m in a predicament and the only way I can think of to get out of this predicament is to kill myself off and come back as someone else. Sounds a bit OTT but if I tell you that I find myself desperately wanting to abandon my football team and find happiness in supporting someone else you’ll understand.

You can change everything about yourself from your sex to your name but it’s unacceptable to switch football allegiances.

Abandoning your football club is quite simply the last taboo in Britain. If you know me you’ll know that I’m not a taboo breaker and I’m not even a taboo drinker.

So I’m thinking about using Jason Lambert as the enabler to becoming a Tottenham Hotspur fan. That’s’ the kind of team he’d support, the poor poor bastard but at least he’d be happier than Mat Wills. May he rest in peace.

More of Mat Wills on the internet: