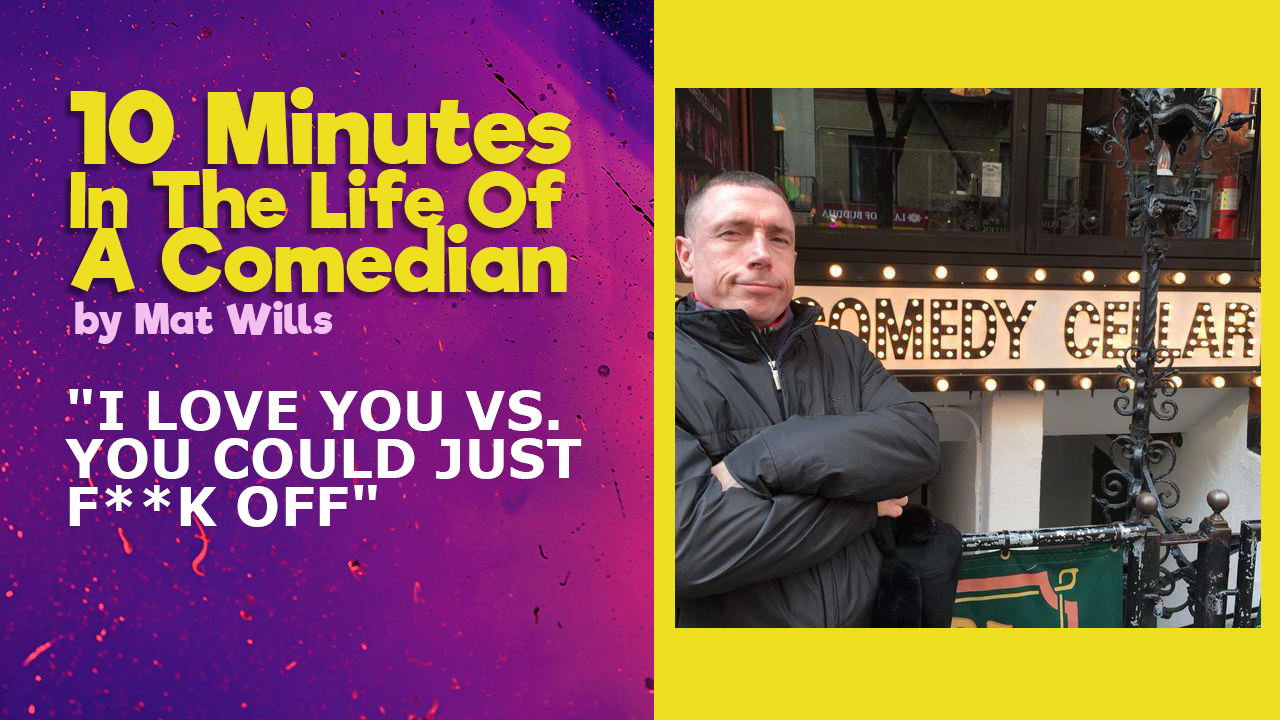 During my time on this Earth, I’ve rarely lived alone and mainly shared my space with others. Some family, some friends, some idiots. OK, lots of idiots, or were they?

The common factor that I’ve heard from those that have shared a space with me is that I’m not always that easy to live with but that’s what idiots would say because I believe I’m relaxed, level headed, thoughtful, humble………

Clearly they were all wrong… Yet, 3 years ago it started to dawn on me that maybe I was the problem.

I’d spent 10 days living with a friend in New York. We were fairly close as mates. Well, as close as we let one another be. I thought being with him for that duration would test my patience; it turned out it tested his.

I like this guy; there is no filter with him. He says what he thinks and while that’s not appreciated by most of society -for fear of upsetting other people- he doesn’t subscribe to that nonsense. He reminds me of my brilliant step mum who was an honest talking South African lady who called it like she saw it. She was a force of nature and if she gave you a tongue lashing you knew you were lashed.

She was always right of course, apart from that top. I loved that top.

Back to New York; the towel that we stood on by the shower was wringing wet and I allegedly screamed at my friend.

“How did this towel get so wet?
Why didn’t you hang it up when you were finished?
You stood on this for all of 30 seconds; did you take it in the shower with you?
What are you, some sort of animal?
I’ve got to live with this for 10 days?”

He looked at me and ignored me.
I didn’t think anything more of it.

Then, the next day, he asked if I’d calmed down about the towel. What was he on about? What towel? He then replayed at the same volume my exact words and actions. It sounded like my step mum, exactly like my step mum, and me, but without that whiney nasal sound I believe I have [he does a very good me impression].

He was doing the flailing around of my arms, the head thrown back in disbelief… it was like looking in a mirror, although one that made me look a little taller and not so good looking.

He wondered at the time if he should punch me to calm me down. Damn, I think I agreed with him. I may of, just maybe, over reacted.
I then started thinking about all the times I’d spoken to people and it turned out I was sounding angry and aggressive at them though I thought I was just expressing an opinion.

Damn it could be me………alongside people misunderstanding me.
So my dilemma was should I change?

Being in my late 40s, I’d probably got 16ish summers remaining. Was it worth putting the energy into being a better person to live with?

I mean, those books that needed reading or the jokes I wished to write were not going to be realised if I was trying to be a better person to live with, were they? Plus, how many more people would I live with? I did believe I could change. Almost anything can be achieved if you really want it to happen, but you need to really want it.

While typing this up my sister asked what I was doing. I explained that I was writing about my failures as a housemate. She said she had a few hours spare to give examples as she had hundreds. I declined her sarcastic offer.

I was still reminded that on the very few occasions she visited my home I let her know that her shoes and coat were now by the front door for when she was ready to leave. This was normally within 5 minutes of her arrival. I thought I was just being practical. Turns out it’s possibly seen as rude.

Perhaps I was the arsehole.

It was because of anger. I was angry. Very Angry. I defined the short person stereotype.

Once I decided that I no longer wanted to suffer, I changed.

This realisation was important because if I was that miserable then what would I become as I aged? How exhausted would I be with my life? With the below quotes in mind (hastaggable by someone I’m sure) I started to rewire my brain;

One of the ways to alter my attitude was that I started to say “I Love You” before any interaction with another person. Obviously this was spoken in my head. I occasionally did try saying it out loud but it really made people uncomfortable.

The theory behind this method: It rewires your brain by changing the experience from a potential negative one into an always-positive one. All I needed to do was apply this rule for every single interaction and then the nice, kind and loving person that I knew lived inside of me could be on display all the time, rather than occasionally.

The problem I found with trying to change is that the anger inside me had become my default setting so that before every interaction my brain said “You could just f**k off”. This was exhausting. During the transition my brain played out the following conversation:

Did I want them to f**k off or did I love them? It can’t be both. Can it?
I think my brain eventually started to change because of the contradiction of this argument.
Love seemed to be winning…

How do I feel nowadays? I’m happier and less angry…
These days my brain plays out a different conversation before any interaction:

“I love you…. especially if you could just f**k off”

It’s a huge step in the right direction, right??
Anyway, there’s really no need to get a towel that wet or leave your shoes scattered to the wind.