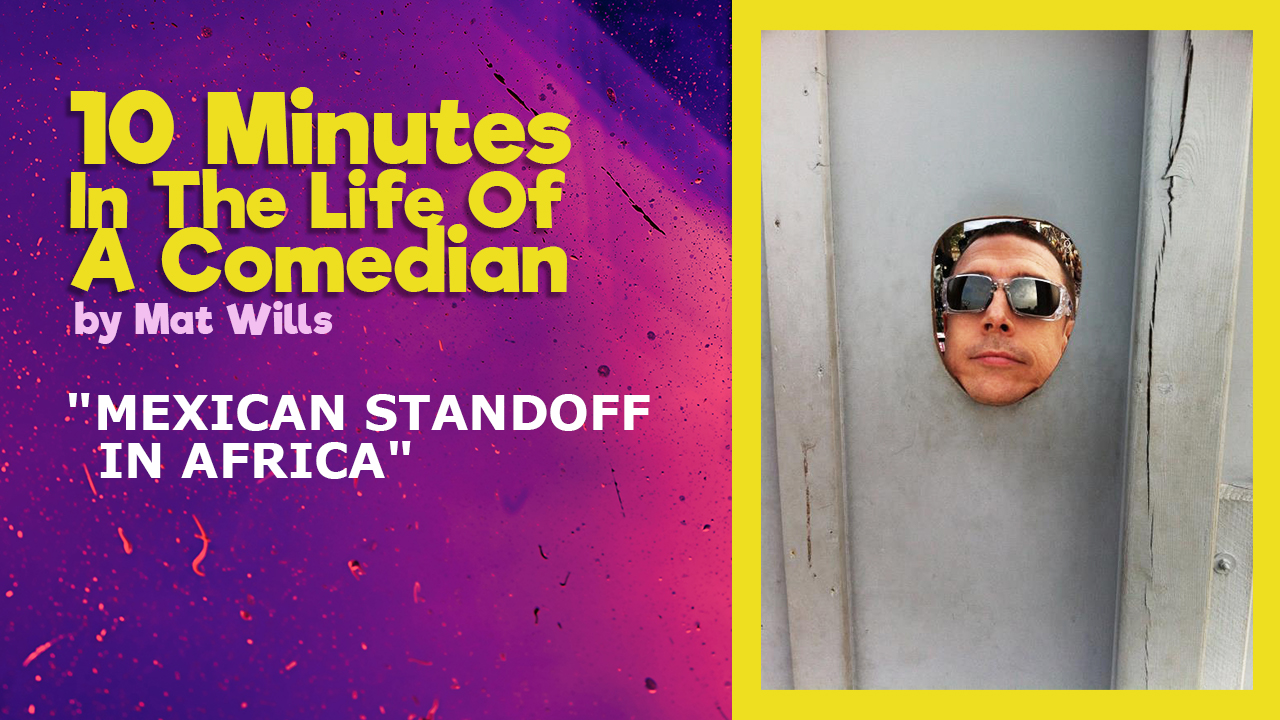 I HATE TO SHATTER YOUR EGO, BUT THIS ISN’T THE FIRST TIME I’VE HAD A GUN POINTED AT ME – JULES WINNFIELD

My other (better) half believes that I am a challenging human being to live with. She also has a theory that I can be a dangerous fool when we go on holiday; you know, like the time I had a Mexican standoff with real guns in Africa.

Yes, you heard me, you can have a Mexican standoff in another country. I checked.

Pretend for the next few seconds that we are in Scooby Doo. Let the world go wobbly and flashback to a holiday we once had in Morocco. We picked up a pretty cheap all-inclusive deal in Marrakesh. The same all-inclusive holidays that were made achievable for the masses through the Wham song Club Tropicana.

Without George Michael thousands of British people would still be supporting the local economy of a place by eating and drinking in nearby restaurants. Doesn’t that sound ghastly?

Anyway, I thought a Moroccan holiday would be like one of those old road movies with Bob Hope but with worse jokes. I was partly right, but it also had guns, fear, wee and lollipops.

We went to the market, which is called the Medina. Not a Funky Cold one.

The Medina comprises a series of narrow claustrophobic alleyways and in some respects is like a weird African version of Bluewater. The difference here being it is thousands of years old and the place reminded me of one of the scenes in Raiders of the Lost Ark where the heroine is carried away in a basket. It also desperately lacked road signs although I’m not sure why that’s important, as I can’t read French or Arabic.

I realised we were not in the good part of the market as my brain perceived the smell of opium, which is a smell you don’t forget once you’ve tried it. Opium tastes like the best chocolate experience ever whilst simultaneously removing all desire to succeed and accomplish anything. I’ve had managers who have had the same effect.

Curiosity killed the Mat, and as we were following the opium smell, I began to realise we were not where we should be. My other (better) half does not like to get lost. Personally I don’t mind, especially on holiday, as there is nowhere else you need to be, and a bit like Scooby Doo an adventure might stumble upon you.

All of a sudden a chap appeared, like a shopkeeper in a 1970’s cartoon, and offered us help. He then grabbed this random child and spoke to him in Moroccan. I like to think that he said “Look after this poor infidel who has lost his way in our city and, by the looks and smell of him, in life as well. Be a good person and guide him out of this maze.”

I’m guessing he didn’t say that – although I do have the look of a poor infidel – but I thought we would be fine. What was the worst that could happen?

Once upon a time in a Bangkok bar, I was chased by a Thai man wielding a machete and I survived that. How hard would it be to survive the Moroccan equivalent of Bluewater? Plus, it was daylight and I hadn’t been drinking for 16 hours with two strangers I met on a plane.

I wasn’t that worried about being robbed as I only had about £30 on me. My other (better) half may have been slightly more perturbed as she had a ton of cash on her as well as her credit cards and her passport.

The kid started leading the way and after a short while we stopped to buy a Chupa Chup lolly. This kid can’t be dangerous if he’s into Chupa Chups …

We walked for a few minutes more and my other (better) half noticed that we’d picked up a tail. It smelled like a dead cat [Bob Hope gag for you there] but in fact it was a motorcycle. The motorcyclist dismounted and swaggered over to us. He called our young guide over and spoke to him in the local dialect. Until now he had seemed happy but now the kid looked scared.

We might be in danger here, I thought, so the best thing you can do when trouble strikes is to front it out. So I fronted it out like the legend I occasionally think I am.

In my most jovial cockney patois I said:

“Hello” he said back. Good he spoke English. Or at least that one word.

He asked us who the child was and then explained that he was a policeman. The kid now looked really scared.

To prove his policemen credentials, and I guess ego, he pulled out a weapon, pointed it at me and announced, “I have a gun’. He then pointed it at my head. Like all guns it was intimidating. I was scared and it was a good job I was dehydrated as I only let out a little bit of wee.

I’m unsure of the correct etiquette when having a gun pulled on you. I’m sure I was taught something in school but I couldn’t recall it so, instead, Samuel L. Jackson (in Pulp Fiction) crossed my mind.

Did I really just say I have a lolly to a man waving a gun at me? That’s ridiculous; I better say something smart to qualify this statement.

“It’s a Chupa Chup!” I exclaimed with all the bravado and stupidity that that statement can hold.

He looked at me like I was insane. Gun versus lolly. It was the classic Crocodile Dundee ‘that’s not a knife’ scenario but with a very uneven playing field.

He looked at me. Who knows what went through his head? Probably, “this guy deserves whatever is coming his way”. He smiled. Holstered his gun. Spoke to the kid who nodded in agreement. The copper then said goodbye and drove off.

The kid looked relieved. I was relieved. My other (better) half was relieved. I’d fronted a guy with a gun with only a lolly, which was a dumb thing to do, and I didn’t even have one to offer to him.

A few minutes later we left the Medina and were in a cab heading back to the safety of the George (hallow be his name) Michael all-inclusive resort to survive me being stupid another day.

Another life lesson learned: Always carry a Chupa Chups lolly and a smile, and you can front out anything.