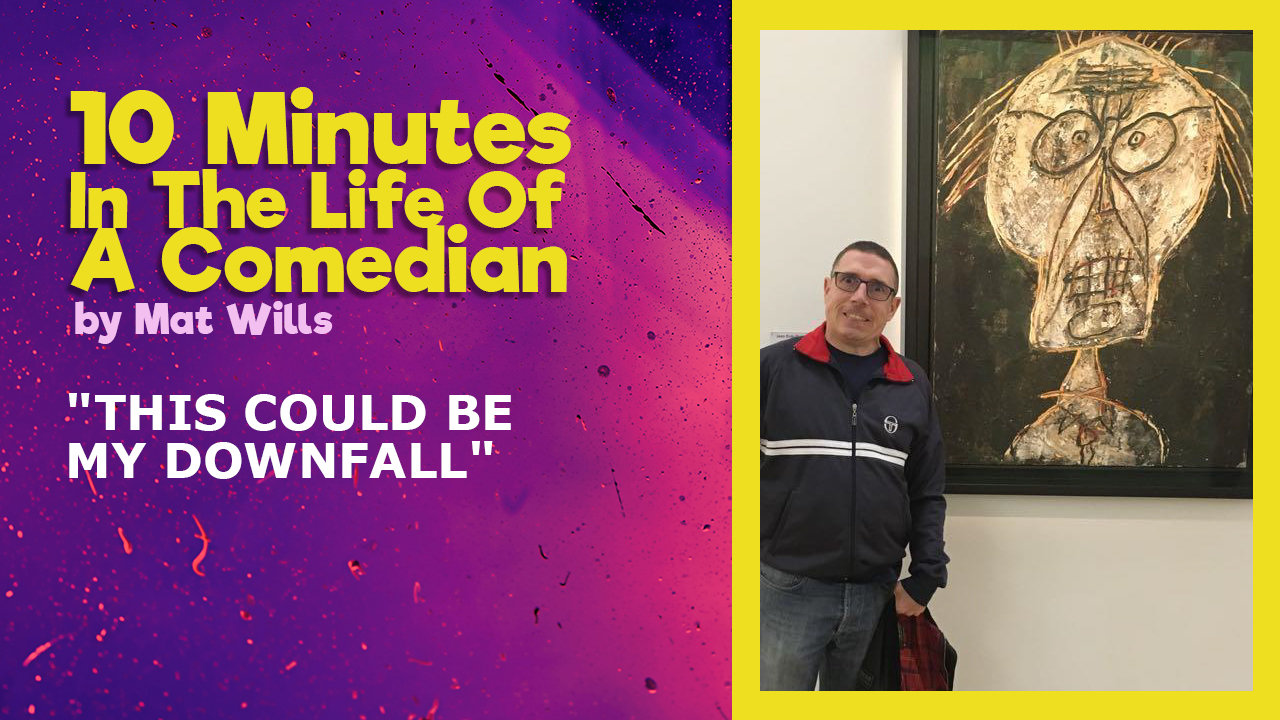 EVERYBODY IN HERE’S INNOCENT, DON’T YOU KNOW THAT? – THE SHAWSHANK REDEMPTION

My biggest fear is being attacked by little porcelain dolls with pointy teeth. Oh, and going to prison. The very idea of prison scares me, and I break out in a sweat if I am sent to jail in Monopoly.

As I recounted recently some of my feelings about sharing my life, and space with others, a few people have kindly got in touch to remind me of the occasions I wasn’t the best house/flat mate/friend/boyfriend. Which was a shock, as I didn’t think they were talking to me any longer.

One story that still haunts me goes back to the 90s. At the time I lived with my then girlfriend in Shepherd’s Bush. Back then -and it may not have changed-, it was a very scary part of London to live in, with the best example being that during a two-week period there were 3 murders; all within five minutes’ walk of our flat.

It was 1994, I was young and skinny [ish] and not for the first time I was in love. I had a good job and our rented home in Zone 2 cost less than £100 per week. It was a 1st floor flat on a 1900’s terraced street nestled between the Goldhawk and Uxbridge roads, otherwise known as the Murder Mile. See previous paragraph.

We didn’t have an outside space so we would sit on the windowsill, our legs dangling into the front garden 20 feet below, and smoke. As I said, life was perfect. It was so perfect a packet of cigarettes cost around £2 and we never knew we had it so good.

The one-day that still gives me nightmares was an idyllic and gloriously bright lazy Sunday. I should say I’ve never liked sunny days, probably because I’m a redhead and I burn easily. I’ve always thought that if the sun were to tan me, and join together my freckles, that I’d have the skin tone of an original Ommpa Loompa. Best to stay away from the sun, just in case.

The weekends, when you are young and in love with no responsibilities, are open to all possibilities and on this day, we chose to do nothing.

Doing nothing is a skill I have somehow lost along the way, but as I have mentioned before, I’ve estimated that I have about 16 summers remaining so I’m trying to get whatever it is that needs to be done, done.

Anyway, back to the story. I’m not sure why, but as my girlfriend was sitting on the windowsill watching the world go on, puffing on a Dunhill red, I crept up behind her and pushed her a little bit as if to simulate her plummeting to her death. Obviously, it was only simulation, so I stuck my fingers in the belt loop of her jeans, pulled her safely back and said “saved your life”.

Along with the momentum I’d created, by pushing her, it meant she fell out of the window and onto the street below.

I’d like to say that it all happened in slow motion, similar to Hans Grubers’ dramatic death at the end of Die Hard, but this wasn’t the Nakatomi Tower, I’m not Bruce Willis, she wasn’t Alan Rickman and, as we weren’t in a film, it happened much quicker than that.

Chillingly I will always remember her momentary scream before she hit the ground below with a dull thud.

I’d broken another of the Ten Commandments. Five more and I’d have the complete set.

Immediately fearing the worst, I was doing a 10 stretch for murder. I’m not a person designed for jail. I’d be currency in prison and I wasn’t fancying the thought of my new life in the scrubs.

I froze and looked at the corpse I created. I had seen a dead body before but not one of my own making. How could I dispose of this cadaver? I’d need help. Who should I call?

Then I heard a groan. Was that me? No. My girlfriend rolled over moaning.

Thank the lord Harry!! She wasn’t dead!! Not only had it saved a phone call but it also meant the only porridge I was going to be doing was Ready Brek.

I rushed to her aid. “are you ok?”, I managed to whimper. What a stupid question! Of course she wasn’t bloody OK. She was living with an incredibly selfish stupid boy/man who, from her point a view, had just pushed her out of the window of a first floor flat. She looked to be in shock and almost as shook up as my good self.

I went to help her up and then started to apologise as we walked back into the flat with her hobbling behind me. In hindsight, and if I had been the visionary I always wanted to be, it was at that precise moment I should have created a TV show named Jackass.

She was OK. Angry, hurt, bruised, but OK and she’d only sustained a few minor cuts and bumps. I started to blame the belt loop on her jeans which, looking back, was a bit silly as belt loops are designed for belts and are not meant to be safety harnesses for women being propelled out of windows.

I lived to fight another day as did she.

Sadly, we didn’t survive as a couple because I’m not sure if she trusted me after that. We’re still friends though. She moved so far away she was almost on her way back and if I’m not mistaken I think she lives in a bungalow.

This near-death / nearly jailed experience we shared seemed to set a dangerous precedent, though.

Fast forward to the end of October 2018. My day was like any other until my partner slipped whilst walking down the stairs carrying a suitcase. To say she was in a bad way is an understatement. There was so much blood and screaming it could have been a scene from a Tarantino film. Instinctively I knew if she died I was looking at a murder charge and would be spending the rest of my life in the ‘scrubs’ for a crime I didn’t commit.

The ambulance arrived and due to her injuries, they administered gas and air, which helped a little. I let her have a go when I was finished.

We were rushed to the hospital with the blue lights on and everything. Hospitals are scary places as the air is filled with fear and all you can do is think -as you try to shut out the noise of other people’s misery- and await your turn to be seen. Whilst lying there in pain, waiting to discover if she had a broken neck, my incredibly brave girlfriend asked me “What’s the worst that could happen?”

I thought for a second, took a deep breath and then in detail I told her. Firstly a doctor would recognise me from a comedy gig and, subsequently, he/she would follow my stories and pursuits on social media.

As the doctor was attending to my girlfriend, he/she would be on the phone to the law telling them the ‘fall down the stairs’ story was suspicious. He/she would tell the police that ‘The Boyfriend’ had form and he/she knew this because he/she had recently read that I had pushed a previous partner from a window ledge.

My girlfriend would then die in my arms before she had a chance to tell the police the truth. In a plotline from EastEnders I would be arrested for murder although, sadly, I am not Grant Mitchell and my Mrs isn’t Tiffany. A twitter hate campaign would be launched against me, with the overly long hashtag: #theboyfriendwholookslikeWarwickDavisdunnit

Warwick Davis would seek to distance himself from me but consequently his career would be finished.

In court I’d defend myself, and my main point to the jury would be to tell them I was a struggling comedian and my girlfriend was the main bread winner so why would I kill her?

At this point I realised I’d watched too many episodes of Law and Order.

Everyone in the trial would testify that I was a nice bloke, albeit with some dodgy tendencies, BUT the jury would find me guilty saying that, whilst I might be the last person anyone would suspect of murder, I had recently joked about it on stage and there was a precedent, so the circumstantial evidence against was more than enough in this case to convict me.

For the record the undeveloped ‘bit’ I was doing on stage was about marrying, not for love, but so we can have the right to switch off one another’s life support machines in addition to accessing each other’s pension. Nothing says I love you more than I want to kill you and take your money. Like I said… it’s undeveloped.

I would then be sent to prison where I would be left alone because I was a convicted murderer and thus classed as a dangerous person by the other prisoners OR I might be some sort of currency. Either way I’d have to learn to smoke again (which shouldn’t take long). I’d be in my cell recalling everything I had lost. My friends. The cats. My freedom. Oh, and my girlfriend.  Again.

She curtailed the story, looked up at me and said, “What’s the worst that could happen to me, you selfish idiot?”

Of course, I knew she meant that…

Anyway, she didn’t die. There were some broken bones and dislocations and lots of pain. The staff at the hospital were all incredible and helped fix her and thankfully no one recognised me.

But from now on, I have to be careful…